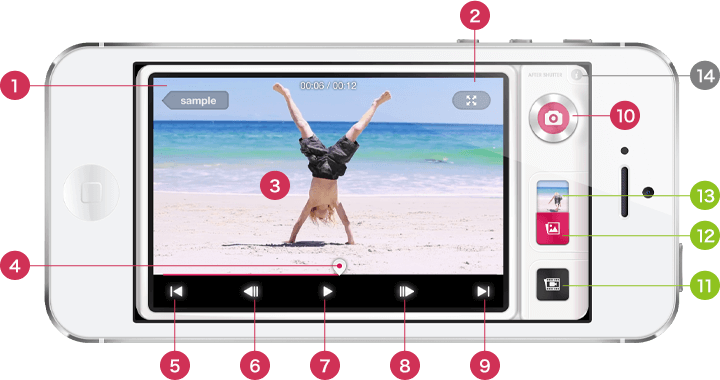 1.Back
Returns to the video list screen.(*Only for the iOS version.)

6.Frame back
Returns to the previous frame. Press and hold for continuous rewind.

7.Play/Pause
Switches between play and pause with each press.

8.Frame forward
Advances to the next frame. Press and hold for fast forward.

9.Jump to end
Moves to the video's end position.

10.Shutter
Captures the displayed video image as a photo.

12.Image list
Displays a list of photos captured with AfterShutter 4K. Single or multiple photos can be shared on social network services or sent by e-mail.

13.Display latest photo
Enlarges the latest photo captured with AfterShutter 4K. The photo can be shared on social network services or sent by e-mail.

14.Help
Displays the version of AfterShutter 4K you are using, as well as a link button to the support page (FAQ).

*About the Android version

Buttons on the photo confirmation screen

1.Save
Saves the captured photo, and returns to the video playback screen. Photos are saved in the camera roll.(*Only for the iOS version.)

5.Cancel
Returns to the video playback screen without saving the photo.(*Only for the iOS version.)

*About the Android version

AfterShutter 4K is available on the App Store and Google Play.